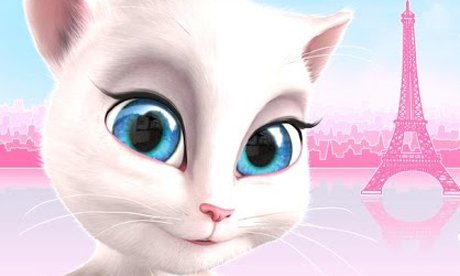 “Mrs. Rego! What about ‘Talking Angela’?”

I got this question over and over. In fact, I was asked this question so many times in one day that I did the research right in the middle of my last presentation at a recent middle school career day.

As a visitor on this campus, it felt like an epidemic. I started to become worried when the stories grew fantastical. Kids being watched. Phones being hacked. People being kidnapped.

Let me back up.

I regularly speak  at schools of all kinds about social media, technology, and online safety. Each school is it’s own universe and I learn lots of things about that particular community of people, their habits, tools, and behavior. On this day, I practiced a new element in each of my presentations through the day. I spoke to 5 classes of 28-30 kids. I polled them to see what they were using to talk to their friends. It started the tone right, getting them engaged within the first 30 seconds. Some classes were more energetic than others.

During the question and answer portion of my talks, someone in 3 out of the 5 groups brought up an app I’d never heard about until that day. This is normal, for me to learn of a service new to me. (I also learned about Oovoo, a video chatting service that the kids of this school all seem to use.) But when I heard about it in so many classes, from a faculty member at lunch, and because everyone seemed shaken, I quickly grew concerned. I reassured everyone that it couldn’t possibly be what they were all saying. At the beginning I felt that I would’ve heard about it, it would be all over the news, but I realized I needed to get informed immediately.

By the end of the day, I said, “Hold on, everybody. Let’s find out right now.” I pulled out my phone in front of 30 kids and 3 faculty members, and looked up these words “Talking Angela Predator” into Google. This is what I found:

It’s an artificial intelligence application that asks some basic questions of the child such as name and age to be able to address them  and appropriately guide the conversation based on the age of the user. There are several other apps that do the same thing. iOS developer Out Fit 7 Ltd. other applications include “Talking Tom Cat”, “Talking Ben the Dog” and “Talking Gina the Giraffe”.

The claims are that there are pedophiles using the app to spy on children. One rumor even states that a child disappeared, as I’d heard. None of this is true. The hoax debunking site Snopes (my absolute go-to in these situations) has quite a bit to say regarding the claims.

In site after site, this is declared a classic hoax. The Guardian says so. Urban Legends too. Naked Security says in it’s blog, “‘Talking Angela’ appears to be entirely benign, and there are no obvious privacy concerns that differentiate it from thousands of other iPhone apps.”

We need to talk about critical thinking

When viewing a post online about hero dogs, Bill Gates giving away money, and too-good-to-be-true catches, we need to pause before we share unvetted information. It’s not easy to slow down, I know. Last week, I fell for the hero dog supposedly saving hundreds of lives at the World Trade Center collapse. We all get suckered once in a while. But it’s really important to use our brains before we do damage with viral rumors.

Stop and think before you pass it along. If a little voice inside even whispers that it may not be true, it’s usually right. Use a search engine to search for the main words of what you learned and “hoax” or “truth”. You’ll get the answer you want. It’s worth taking the extra minute to ask questions of reputable sources before speaking or posting about it. Just because everyone else is saying it doesn’t make it true. It makes it a chain letter.

Once you start looking for them, they become really obvious. The goal here is to be more aware, not perfect.