You are here: Home / Blog / Reputation Management / The Selfie Test 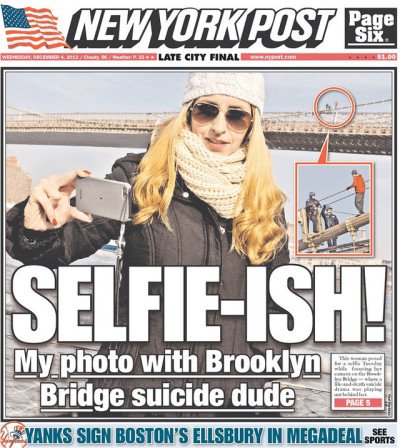 Take “The Selfie Test” with me next time you are tempted to whip it out and capture the moment:

This woman decided it was a good idea to take a selfie while a man in the background was being talked to safety during a suicide attempt on the Brooklyn Bridge. Her behavior landed her on the COVER of the New York Post in early December 2013. Think before you take that picture.

(Selfie is Oxford Dictionary’s word of the year, definition: a photograph that one has taken of oneself, typically one taken with a smartphone or webcam and uploaded to a social media website.)

*My selfie test is an adaptation of Rotary’s Four Way Test.