I have a grandfather that just turned 92. He’s been complaining about being old since he was 70. Not to beat a phrase, but that gets old quick. He’s bitter about it to say the least. This is a person CONSUMED with thinking about their age. I’m trying to find ways to connect with him in loud family functions, ways to let him know that even though he’s not able to keep up with the conversation and is largely silent, he’s still a big part of our family.

Today he was watching my 4 year old plays games on my iPhone and he was having a hard time believing that at her age she could make it work. Earlier in the day I had referred to my iPhone as “a computer that can make phone calls” and he said, “You keep calling it a computer.” and shook his head in disbelief. I simply nodded. He looked at my daughter, his great granddaughter, again and I could see it sink in for him what a smartphone really was. He picked it up, started asking questions, and didn’t stop for 20 minutes.

I train people of all ages to use technology. Businessmen, students, female executives, retired, elderly, young and old. I give iPhone lessons every day. I’ve never gotten so much joy from teaching someone how to manipulate a computer. At 92, the concept that computers won’t have a mouse, that it can be operated with pinching and grabbing, and that technology as he had known it had changed forever. I even threw in that there are computers that can be manned with your thoughts alone (it’s true).

This man taught me how to tie my shoes. But I know that he is not long for this world. I’ve spent years supporting my grandmother in figuring out how to alleviate his pain, make him comfortable, and find something to occupy his time but today we were transported. I was teaching him and he was the excited student learning about a whole new world. He forgot how old he was. He forgot that his aging made him unhappy. He was intensely working through new concepts and ideas, his brain working harder than it had in awhile. He smiled and laughed, shook his head in surprise. He was timeless. I was the teacher and he was learning to tie his shoes. That is something I will never forget.

*UPDATE After this piece was written, my grandfather’s condition worsened. It got to the point that he simply didn’t speak. The world had grown too fast and regular conversations were too difficult. I would sit with him and have prolonged eye contact. He would focus on me and I could tell he felt connected. I’d ask a question and he’d start talking.  I felt as if we talked more in his later years than we ever did when I was a child. 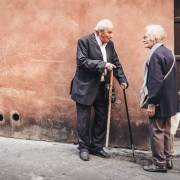 Kids Know Everything About Social Media

You're Not Too Old for Technology!

You Are Not the Only One Afraid of Technology!

Staying Out of Range When Explaining Social Media
0 replies

How To Ban Users From Your Facebook Page
Scroll to top